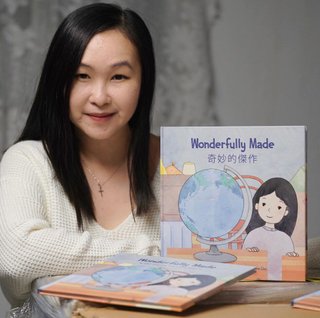 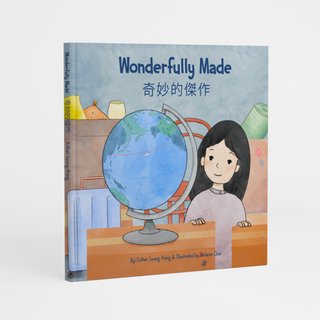 A portion of the proceeds will go to non-profit organizations that support children from vulnerable and marginalized backgrounds.
Shop Now
Home
Book
Shop
News/Muse
Contact
Esther Leung-Kong is the author of the bilingual children's book Wonderfully Made 奇妙的傑作. She was born in Hong Kong and immigrated to Turtle Island (Vancouver, Canada) when she was 9 years old. Growing up as a third culture kid, she moved several times internationally. As a bicultural adult, she writes, speaks, plays music and sings in both Chinese and English.

A mother of three, Esther's passion includes advocating for justice & compassion both locally and globally, leadership development for young people and inspiring others through music.

Since 1998, Esther has been serving alongside and building relationships with families in the Indigenous community in Vancouver. She has been raising awareness among the Chinese immigrant community about the colonial history and treatment of Indigenous people especially the Indian Residential School System .
Since 2006, Esther has been working in the non-profit organization Culture Regeneration Research Society (CRRS) of which she is the Outreach Ministry Manager. Under the same society, she started Project Shine in 2008 where she trains and leads teams of young people from North America on volunteer trips to teach English in rural China to under-resourced students.

Esther is able to combine her passion for music and care for the marginalized community as she serves as the music director of Eagle Youth Music School at Vancouver Urban Ministries (VUM) since 2007. VUM is a local grassroots non-profit organization. She recruits volunteer music teachers to teach free music lessons for inner-city students. She also ministers to and cares for the students' families' needs.
Esther has a Master's degree in Cross-Cultural Ministries and a Bachelor of Arts with a music major, specifically in classical piano and voice training.  She can play the piano, guitar, flute, bass, drums and hopes to learn the Chinese instrument Erhu one day.

In grade 2, Esther won first place in an English poetry national recitation contest in the entire region of Hong Kong. In her late teens, she was the host of a Chinese webcast show. During her college years, Esther enjoyed performing jazz music and busking at Granville Island market place. In the recent past, she had also performed at Chinese night markets and engaged in fundraising events from time to time.
溫哥華作者江梁爾欣 Esther Leung-Kong 出版《Wonderfully Made 奇妙的傑作》兒童新書。

Author of Wonderfully Made 奇妙的傑作